» ynvisible ramps up its in-house display production as...

ynvisible was established in Portugal in 2010 to develop flexible transparent electrochromic displays produced using a simple printing method. In 2011 the company started producing sample products (we tested one in August 2012). Fast forward to September 2018, the company has gone through a reverse take-over, and the now Canadian headquartered Ynvisible Interactive Inc. has inaugurated its new production line near Lisbon, and we had an interesting discussion with the company's CEO, Jani-Mikael Kuusisto who updates us on the company's technology and business.

ynvisible is focusing on developing the inks that are used to print these relatively simple displays for use in everyday consumer goods and printable surfaces. The electrochromic displays are cost-effective and highly energy-efficient. The company used to have a capacity to produce a few thousands of displays each month, but the new production facility can produce hundreds of thousands of displays each month. 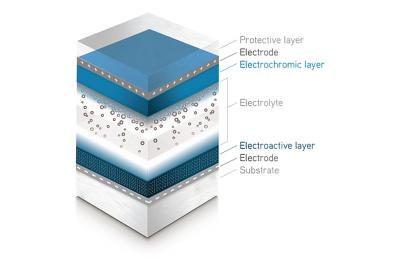 ynvisible is producing displays in a sheet to sheet process - and one that is highly simple, as it is all done in a standard print house environment using conventional printing and converting techniques. The company does not intend to become a display producer - it's end goal is to sell the inks and design tools. However, to achieve that goal, the company offers a range of services that fuel technology adoption - this includes the initial production facility that can rapidly satisfy early end customer needs and also acts as a training facility for manufacturing clients.

In its early years, ynvisible focused on the advertisement market - and it produced all sorts of samples and eventually had commercial projects and applications with several customers, including e.g. L’Oréal and packaging board company StoraEnso. In recent years, though, the company's focus shifted to smart devices and IOT devices - and it expects customers in this market to roll out the first products with ynvisible displays within a year or so.

One interesting market for ynvisible is the label and packaging sector – initially for high-value products. Together with Belgium-based Quad Industries it demonstrated how these displays can be printed right on top of RFID tags - and even be powered from excess passive RFID energy. For some of its applications, ynvisible uses a very simple one-time display (where the image can change once only from transparent to visible) - and combined with different sensors this could be useful for example in packaging to show expiration, tampering, etc.

It is great to hear these good news from ynvisible, and indeed we hope to see these displays on the market by the end of 2019. The company has recently been listed in the Toronto Venture Stock Exchange (TSXV:YNV), which allowed it to expand its operation as it gets ready to ramp up ink production, and display production as well.