Phosphor has released a new E Ink watch - the World Time Curved, and we got one to review. The watch has got a "surf" (segmented) E Ink display that offers 24 time zones, several displays zones. The display is very similar to Phosphor's Digital-Hour watches (here's our review of those) - in fact E Ink tells us it's pretty much the same display. The new watch is thinner, though, at 9.3mm (you hardly notice this, to be fair).

The watch costs $150 and is now shipping from Phosphor's own shop (hopefully it'll arrive in Amazon.com soon as well). The Digital Hour watch is still available for 195$ - so the new watch is actually quite cheaper.

Below the large display there's a single wide button, that actually acts like two buttons - depends on which side you press. The right side switches between modes (time/date, time in large characters, time in small characters and world time). The left side switches between the two display types: black on white or white on black (my favorite). On the world time mode, a short press on the left side button changes the time-zone you're seeing. Setting up the time/date is done via a long press on the right side button, and is pretty straightforward.

One of E Ink disadvantages is the slow refresh rate. And indeed it takes about 3 seconds to switch modes, during which the watch flashes annoyingly. Also the display has a sort of 'memory' effect - when it just changes a character or two. The watch completely refreshes the display every 15 minutes, I guess they do so to erase that memory effect. 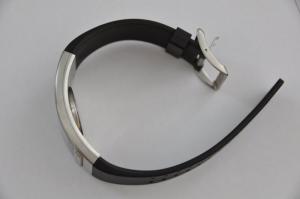 My watch comes with a Polyurethane band (my Digital-Hour has a leather band with an orange strip). I think the world-time watch looks better. Here are a few photos comparing these two watches:

What do people think

This watch can draw attention (although most of my friends are already familiar with E Ink or OLED watches) which is fun. I asked people what they think about this watch. As always in matter of taste - some like it, some do not. Most people think it is too big. Everybody likes the display though - as it actually looks like a printed page or a sticker and not a normal display...

Interestingly, people seem to like the small-character time mode. This is funny as this mode uses only about a quarter of the display. Maybe Phosphor should come up with another E Ink watch with a much smaller display... it can be a hit perhaps.

What do I think

Well, I may be biased, but I like this watch. It takes a little while to get used to, but once you do you can really enjoy the beautiful display. Even after weeks of wearing E Ink watches, it still looks good. And sometimes it's nice to get attention - people want to know what's this watch is all about. After about a week of using it, it no longer bothers me that it's big. It tends to feel like a sort of star-trek communication device - if only it had a phone inside. And maybe a pico-projector... that would have been nice.

Having no backlight can be annoying at nights, especially if your small daughter awakes during the night and you want to see the time without turning on any lights. This is obviously a consideration.

Finally, here's a small advice to Phosphor. If you can design a smaller watch (and a thinner one, too) - do it. Most people I asked do not like such big watches, and it seems a waste to use a thin (under 400 micron!) E Ink display in a watch that's 9.3mm thick.