The Triby is Invoxiaâs new connected speaker. It can play music from your cell phone (or connect to music apps like spotify), make in-group VoIP calls and send messages, on top of being the first non-Amazon device to take advantage of the Alexa Voice Service. The Triby includes a 2.9â active-matrix (296x128, 112 PPI) E Ink panel, and the company was kind enough to send a review unit to E-Ink-Info.

The Triby is a great looking device, with a fun design that can be defined as retro-chic. It actually reminded me of an old-school kitchen radio - which it sort of is, but with a modern twist. The Triby has physical buttons for options like volume control, contact/radio station selection and an Alexa button. A nice touch was a yellow flag that pops out the side of the device to signal receiving a message. After someone reads the message, they can push the flag back in and the sender will get a notification that their message was read.

On the back of the Triby are two magnetic strips, which enable attaching it on any magnetic surface. Since it is primarily meant for use in the kitchen, the thought was probably hanging it on the fridge. Which is what I did at the beginning - but ended up taking it with me around the house when listening to music. 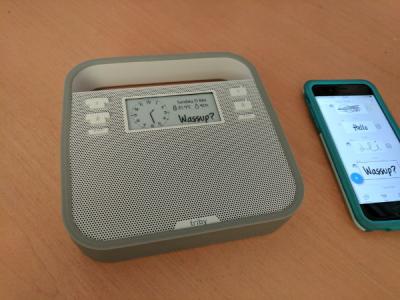 The Triby also has a charging port and a 2.9ââ easy to read e-ink style display showing the date, time, and temperature by default. Which is great and useful. The e-ink screen also doubles as a whiteboard of sorts, displaying emoticons and messages from users. The e-ink display is clear and big enough for showing the sort of short messages that the Triby is designed to support, but I found it to be sluggish and slow to react, which caused me to repeatedly press buttons over and over again because I was sure that the first press didnât register. This was a bit disappointing. A petty but recurring complaint I had about the on-screen display is the lack of a battery meter that would show how much power is left in the battery and when recharging is due.

The Triby comes with a companion app, which is used for setting up and managing user groups and radio stations, as well as sending messages to the display and making VoIP calls in the user group. After pairing the Triby with Bluetooth and setting it up on a Wi-Fi network, the games can theoretically begin. But unfortunately it took me quite a bit of failed attempts and frustration before I managed to get things up and running. I found the app to be a bit unclear and stumbled upon more than a few obstacles until I managed to understand it properly. The Alexa service also stopped working several times a day, and I needed to restart the device.Â

The Tribyâs more âfamily-orientedâ uses like messaging and calling are fun, and could actually be useful for informing family you are on your way or that dinner's almost ready etc., but that would require getting used to doing it through the device and not over the phone. The same goes for listening to music - I liked the volume (much better than my cell phoneâs) and the sound quality was not too bad if you're not a stickler, but again - Â nothing that can't be done over the phone. I must admit, though, that I liked the Triby and indeed ditched my cell and got accustomed to using it in my kitchen (and around the house) for music and radio purposes! Â

Using the e-ink screen as a message board to send short messages, emoji, or even doodles was fun, but it did not seem to stick and I stopped fiddling with it a short while after finishing my hands-on examination of the device for this review. I LOVED the part, however, in which the Triby receives a message and the little yellow flag pops out of the side to signal the new message. I would sometimes send a message just to see it happen. Fun!Â

The Tribyâs most advertised feature is the Alexa voice control. As I said before, it was a bit challenging to setup and it kept failing from time to time - but when it does work, the personal assistant service is pretty cool. Unfortunately, most of Alexaâs features work only in the US - so I could not really use it for much. Invoxia says that UK support should arrive early next year, and hopefully a global rollout will follow. 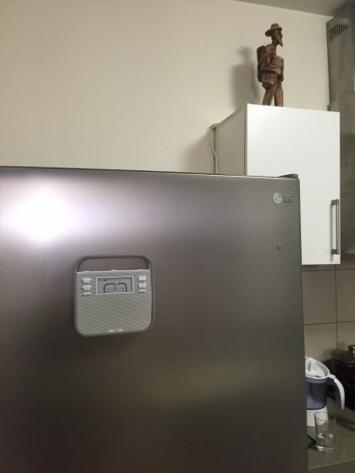 In conclusion, I would say that after fiddling with the Triby for a while now, I have experienced both great joy and fair amounts of frustration. There are little things about the Triby that annoyed me, like having to reset the device a couple times when Alexa got stuck, the slow response time and more. This device is still rather new and both it and the app are probably due for some updates and fixups. Still, I did quite like the Triby as a whole - I think itâs a great gadget, fun to use and very addictive. The hardware itself feels like itâs of good quality, the volume and sound quality are good, and the Triby designers really did a great job. I plan to keep using the Triby and hopefully see it get better over time (and updates).Â

The Triby is now shipping for $199Â - you can buy it directly from Invoxia or at Amazon.com.