Kent displays, a leading Reflex LCD company launched several models of eWriters since 2010, which are now sold in around 30 countries around the world. 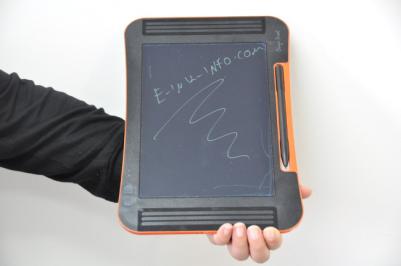 About the Sync 9.7 Boogie Board

The Sync 9.7 is a 9.7 inch electronic notebook launched in 2003, sporting the company's eWriting technology. It also has a microSD card slot (in addition to a built-in 2BG of on-board SD memory), USB and Bluetooth. It comes with its own stylus, micro USB charge cable and a 1-cell lithium-ion battery.

This model is all about incorporating the pressure-sensitive LCD screen writing experience with the ability to sync with other devices (iOS/Android cell phones, laptops, desktops…) via Bluetooth. Whatever is written on the screen can either be saved in the device memory (to be uploaded later) or immediately shown on a device – using the supporting software (and mobile app). It is even Evernote, OCR and Adobe Illustrator compatible.

As Kent Displays considers this gadget to be the harbinger of a paperless revolution with their "say goodbye to paper" motto, we set out to fiddle with it and see for ourselves.

A first look at the Sync 9.7 reveals a plastic body encompassing a smooth black screen. The plastic edges around the screen have a shiny-matte duality which is both pleasant to hold, and easy on the eyes. The design is of sleek black and orange tones, beautifully curved with a stylus firm in its dedicated place.

The Sync 9.7 has an on/off switch on its side and physical buttons for erasing and saving (as well as two diodes to indicate power and Bluetooth activity). The whole apparatus is fairly thin (about 5mm) yet it feels sturdy. The writing surface itself is 140X202mm in size (or 9.7" diagonally) and is very clear to look at and fun to write on. Texts and drawings appear clear on the screen, yet more contrast would have been nice.

The Sync is meant to be used solely with the attached stylus, and will not work half as well with other pen-shaped artifacts. A really interesting thing is, that touching the screen with your hand or finger will not leave the blur/trace print that it might sometimes leave on other similar screens. I'm not sure if this feature is intended, but it's definitely useful.

Using the stylus, it was possible to achieve accurate writing and drawing, without a prohibitive or limiting feel to it. The screen is convenient and pleasant to write on and I found myself continuing to play with it even more than I needed for the specific note I was planning to take.

Alas, the contrast, as was mentioned before, is less than optimal and the screen even feels a bit dimmer than the company's simpler model that I also played with for this review, the Original 8.5 one (that is very fun to use but primarily targets simple jotting and list-making or even kids, with no connectivity capabilities). This is probably due to the fact that the Sync 9.7 model has a touch layer on top of the LCD. At some angles, as well as in direct sunlight, the dimness made it a little hard to read, but in normal conditions it is not too problematic. 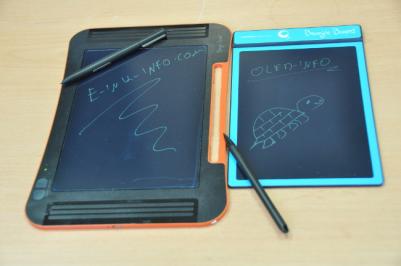 Once an image is drawn on the screen, it can be erased by pressing the 'erase' button, or saved by hitting the 'save' button. Even 'erased' images are stored and can be viewed once connecting the Sync to a device (and using it as a bona-fide storage device). A curious revelation was that the Sync allows jotting on it while it's closed, but those images cannot be saved. I lost a grocery list because of that little thing, and quickly came to understand that the display is a bit misleading that way... but this is really somewhat of a moot point as the Sync is not a battery muncher – it only rarely got plugged in but didn't seem to care. The company claims it can work for a whole week without charging, and from my experience I'm prone to believing them.

The dedicated software offers many helpful features and works fluently. I tried it on a laptop and a tablet, both managed to work both the "second screen" feature and the browsing of saved images from the Sync. The GUI is not mind-blowing and felt a bit basic, but it has nice capabilities (I liked the ability to change colors and the social sharing features) and no apparent stutters. I can really see teachers or presenters of sorts using the real-time display feature – where what you write in the Sync instantaneously uppers on the connected device. Almost all features are similarly available on the mobile app, which also worked well and was efficient and effortless to use.

The overall experience of writing and drawing on the screen is great, and pairing this with connectivity is a great idea. The app and software also work well and give it an all-around tight feel. I must admit that while I enjoyed playing with the Sync, I found it to lack an important aspect of revisiting formerly saved files and changing things in them. It's important to say that in this case, the technology is prohibitive and not the specific design, as pressure-sensitive screens like this are not capable of doing so.

So maybe it IS just me. For instance, if a drawing is made, once it is erased from the screen (even if it's saved) it can never be displayed again on the device screen, only on a connected computer/phone. That means that one cannot go back to a former page and make changes, it is simply gone. I see this as a problem, for students (and this device is pitched as an accessory for students, in lieu of notebooks) who can't highlight or change former notes, but also for others who want to edit former lists, sketches, diagrams etc.

Although I can't say I found an everyday use for the Sync Boogie, it is still a fun gadget that can actually do, at least in part, what the package says and turn all of us into more eco-friendly beings. I'm not sure the Sync will eradicate the use of paper completely, but it can certainly save some trees. The smaller and cheaper Boogie 8.5 will sure appeal to children and grown-ups for everyday uses. 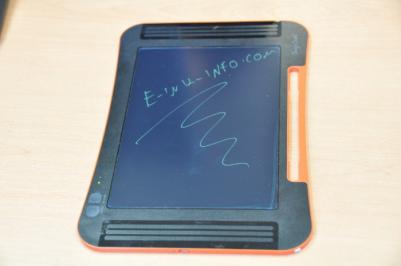 The Sync 9.7 currently costs around $80, and is available at a large number of online retailers, including Amazon. More information can be found by visiting ImprovElectronic's site.

The Sync 9.7 and the Original 8.5 were sent to E-ink-info.com for the purposes of this review. Thanks guys!