In 2017 HP announced its IonTouch system which enables cheap and easy "paperless" printing on small E Ink Cards. Fast forward to 2019, and now E Ink announced a new technology called JustPrintIt, which is based (and licensed) on HP's IoNTouch. 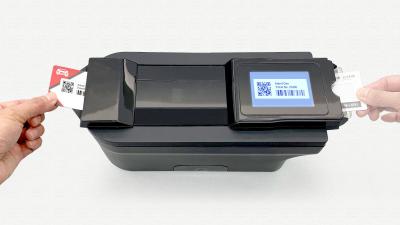 E Ink's new technology can be applied to small displays, but also to large format ones. In the JustPrintIt system, the image can be updated thousands of times by passing the ePaper display material through the hardware imager, without any display electronics. The resulting display cards are tamper-resistant, as images and information on the badges can only be updated by using the associated imager. The technology enables lower-cost displays for applications heavily reliant on printing, such as security badges and industrial labeling.

E Ink will showcase the new technology, which will on display at Touch Taiwan 2019. E Ink is also looking for partners to bring this to market within the next 2 years.